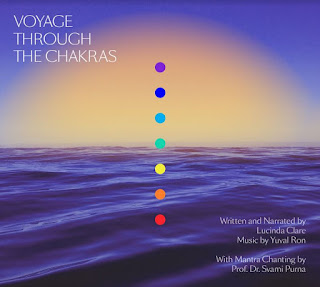 The Chakra system represents one of the great gifts from ancient India and yogic culture. Originating from Sanskrit, the sacred language of ancient India, the word Chakra literally translates as Dzwheeldz. Each Chakra functions as a vortex of spinning energy influencing the physiological and neurological systems in the body. (Excerpt from the label site http://mettamindfulnessmusic.com/chakrasalbum.html )

Life happens and brings us gifts when different causes and individuals paths intersect. That is exactly what happened when Meta Mindfulness Music, Yuval Ron (instrumentation) and Lucinda Clare (voice on CD 1) pooled their resources and created a two-CD set titled Voyage Through The Chakras.

My focus is the music on CD2, which is all the backing music on CD1 while Lucinda guides you through the selected meditations. I use the music to guide me to another place and always have. In this instance, I find it much more interesting to hear both sides of the project and one separate part or parts. Lucinda is A well-known actress and Yuval Ron is an award-winning musician, lecturer, and author. When you are invited to play your music for the Dalai Lama you have reached an apex in your career! What a great honor. I read from a book that quotes the Dalai’s inspirational words of wisdom for every day. I have found it enlightening and so very simple and true.

As it mentions on the one-sheet that came with the Voyage Through The Chakras CD, this is music for the soul. I honestly believe all music is for the soul - to heal it, energize and just put a smile inside you.  Music, good music, is the path to better wellbeing.

Yuval Ron is a multi-talented artisan and he has many friends that help him with the amazing soundtrack to the heavens that awaits you. You will hear Gongs, Oud, Cello, Bansuri Flute, Jaws Harp, Flugelhorn, Sitar and Glass Harmonica, the list is quite extensive. It is literally like walking into a different world, all created by sounds, chanting and then some necessary focus and concentration by the listener is the only requirement. With those thoughts in mind prior to listening you will hopefully discover your own nirvana. There are even detailed instructions on the label website if you want to find out more prior to listening (take a few minutes to look at the video provided here as well).

Voyage Through The Chakras opens the door and it is up to you to walk through and discover what you came for.