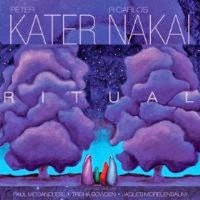 Opening up with “A Meeting at Twilight,” I sat back and closed my eyes, letting the peaceful ebb and flow of the piano and flute lull my senses into a relaxed state. Some days that is hard to come by. Balancing a day job and a full time writing career can make a girl tense. Schedules, life obligations…we all have them. Sometimes it just takes an album like Ritual to break the chains and refocus your energy on the inner workings that really matter. Piano and flute lead the way to the metaphorical bonfire in the middle of the field. The epic meeting of the soul with the creator.  Nothing is between you and the night sky, the stars winking down and the music flowing from the buds in your ears. Nirvana.

Earthy flutes take flight in “Invoking the Elements.” Piano treads on the light as air landscape. Trees sway in the distance as you call the quarters. North, South, East and West. All four elements accounted for. Each sentiment brought to life with the subtle notes of music so artfully composed and rendered into living, breathing art. Jazzy elements infuse the moment, gauzy clouds of bright energy. The elements combine and bring you back to yourself. You are the earth, the air, the sea and the fire. You. Are.

“Dream Dances” is the last piece on the album. It bubbles to life with elements of air and fire, the trickle of water weaving through the heat. Piano sequences in the midst of whispers. Horn and flute meld together with ethereal sounds, giving voice to the longing in the soul. Peace. I have found my place of tranquility. Breathe in. Breathe out. Cello and flute. Voice and key. The harmonies roll over you like a wave. Haunting chants bring the language of my ancestors to life as arms reach up to embrace the infinite. This piece is the crowning achievement of an album crafted for greatness at the onset.

Ritual is a walk into the heart of what instrumental music should be. Kater and Nakai, combined with McCandless, Morelenbaum and Bowden have crafted an album of transformative joy. Elemental in nature, it invokes peace no matter how busy you are. Take a moment. Just listen. Just be. From the haunting vocals to the ancestral chants and Native American flute rendered so artfully, it resonates. Side by side with piano sequences and multi-instrumentation, this is an album you will come to treasure. Make it your cup of tea after a long day and you find your center.

Tracks:
1. Meeting At Twilight
2. Standing as One
3. Invoking the Elements
4. Offering
5. Space Within
6. Envisioning
7. Dream Dances