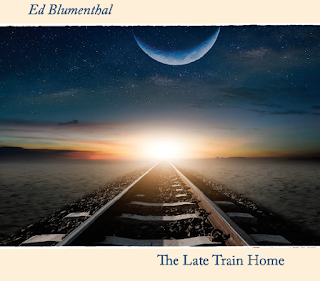 Ed Blumenthal is a Chiropractor by trade. His was no different than many married folks trying to make a life for his family. His work became demanding and his children needed his time as well. Little time was left for him to play the piano. In fact, it took him nine years to return to the ivory keys. As if by some magical instance or the hand of God, Ed learned how to play the piano without being able to read music. He is self-taught and took videos of his hands creating the basis of some tunes. Further down the road, his wife took the tapes and converted them over to DVD, and he was able to relive his videos playing.  As fate would have it, a cello player named Eugene Friesen, thought the music needed accompaniment. To make a long story short, Ed ended up in Will Ackerman’s Imaginary Road Studio to record The Late Train Home. That is the music you will hear on this recording.

In a literal sense, the album is late in coming but it finally made it home. Ed and his music are The Late Train Home. The cover of the album is a view from the train with a beautiful sunset and the crescent moon right above it. We can all be passengers on that train and while we are all traveling down those tracks of life on our journey, we can sit back, breath deep, knowing and trusting that everything is going to be ok. We are here for a reason and to meet our destiny. Ed’s most certainly met his and part of the path he took led to ten tracks on this instrumental piano recording. Some folks may not agree but I look at this as contemporary instrumental music, particularly with piano, as a sub-genre of new age. It is easy enough for relaxation and meditation, so it qualifies as far as I am concerned.

Ed’s piano is like waves and ripples of sound that glide over your body, touching every sense you have, bringing to life awareness of your being and spirituality. In my world, any good music has that capability regardless of the genre. The rolling piano and rhythms are what mesmerize me and carry me away from where I am and where I need to be at that moment in time. Take for instance the title track, it is a captivating and poignant track that has character, purpose, and it tells the story of an artist reaching his destination. Music does speak to us in many different forms. For my ears, I get what the tracks and the title of the album mean by first understanding where the artist is coming from and where they are going. Then I look at the images presented and it all falls into place. That is for me from my vantage point and hopefully in sync with what the artist is trying to convey.

You must look beyond yourself and inside the music to find the answers you seek. When looking through the eyes and soul of another, or in this case the music which equates to those two elements, we see a reflection of ourselves in some shape or form that makes perfect sense. That is what The Late Train Home did for me but the train home was on schedule and arrived at the destination right on time.