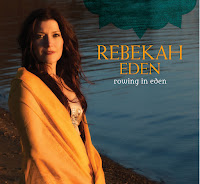 Rebekah Eden’s release this year is a made for movie soundtrack.  Rowing in Eden is 12 tracks of new age music backed with classical vocals. There are also some elements of world influences in her music that make it that much more compelling.

Her tracks were being considered for The Hobbit movies however they never made it to the final production. After hearing what she has to offer I must say it is a shame they did not follow through. Her voice is the most powerful instrument on the recording and everything else, to coin an old phrase, serves as the cherry on top of the ice cream. There is a gorgeous addition of a 41-piece Czech Orchestra to her amazing voice as well. Not to take anything away from other critical parts of this music that makes it complete, I am just amazed how clear and stunning her vocal talents are.

“A Message From The Stars” is superb way to open the curtain and eventually close it with a different version of the song. I like the transitions in the track with both songs and the second version, the impactful closer, is a heavenly melding of many voices. It will give you a greater appreciation for the ultimate instrument, the vox humana.

Rebekah recognizes her influences and shows that in the most prolific way with covering Led Zeppelin’s “Ramble’ On” (from Zeppelin II) and more specifically Robert Plant’s strong influence. She does this song in her own way and I have to say I found it quite fascinating. This one would have been perfect for one of The Hobbit movies. Her operatic vocal style just soars over the music and every note as if the song was written especially for her. That pretty much says it all considering it is a cover.

“Light of Destiny’ is a very stirring track. Rebekah’s vocals are angelic, rhythmic, and it gave me a chill, the good kind that makes you realize you are feeling something spiritual and special. These are the moments I cherish when listening to music.

More and more I am hearing a fantastic combination of instruments found in new age, classical and world music. The amalgamation is spectacular and all three genres are so closely related it sounds like everything comes to together to form one powerful style that cannot be denied. Artists like Rebekah Eden are leading the way, blazing a path for others to follow. Rowing in Eden is one of the better examples I have heard of genre mergers this year, predominantly one that included vocals.

Key Tracks: Ramble On, Light of Destiny, A Message From The Stars (Virtual Choir)