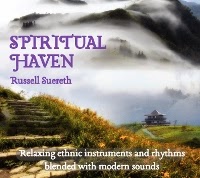 Russell Suereth is a keyboardist with a focus on New Age and world music. His new album Spiritual Haven is a combination of classic Western instruments blended with some more exotic instruments such as a duduk, guzheng, grand marimba, koto, oud, krin and ethnic frame drums. These sounds are accentuated by the hang drum and woodwind instruments as well as many others. Original compositions range from spiritual reflection to observation of nature in all of its forms.

“Glitter of Light” is a song based on hope in difficult times. Sometimes I think we are led to things when we need them most and after losing a family pet of fourteen years and dealing with the illness of another pet this past week I believe it. “Glimmer” breathes life via percussive elements, woodwinds, synth and keyboard action that was peaceful and reflective. The rhythms and soft vocalizations were both soothing and uplifting, and a nice trip out of my head for a time.

“Notions Astir” begins with a mellow synth experience blended with clanging that reminded me of banging silverware and frenzied housework on a weekday night. It made me smile and be joyful in the basic things of life.

“Red Moon Rising” compelled me with the title of the song and I was not disappointed. Electronic keyboards and synth bring to mind a large red moon rising over the big night sky. Percussive elements add to the anticipation, along with clanging sounds that reminded me of going sky watching with my husband at the cemetery in Yorktown, Virginia. The big dark sky, picnic laid out (clanging silverware sounds again) and a telescope so you don’t miss a thing.

“The Village Breathes” is the last song on the album. Sounds of water, birds in flight, people speaking and a lovely piano sequence make it one of my favorite tracks on the album. This piece has a more distinct sound that brought to mind the movie The Medicine Man and the villagers working and laughing together as they worked. Exotic world music blends with modern sound to create a visual impression of the South American jungle.

Russell Suereth has captured moments in nature and the human psyche with his album Spiritual Haven. The album moves from one song to the next weaving a spell of modern musical design interspersed with exotic elements and textures. This was an enjoyable album for both its rhythms and sentiment.