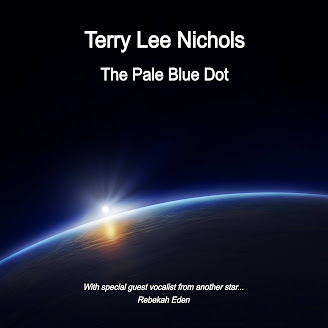 The more you read about Terry Lee Nichols and his release The Pale Blue Dot the more interesting and intriguing it becomes. I have also had a fascination for space exploration and was reading astronomy books at a very young age. After looking at all the notes provided with this release, I anticipated an amazing aural ride through the cosmos. As it turned out that is exactly what I experienced.

On February 14, 1990, NASA's Voyager 1 probe snapped a photo of Earth from 3.7 billion miles (6 billion kilometers) away which was referred to as The Pale Blue Dot. There was a lot of excitement about all this and the music you will hear on this recording is as cinematic and beautiful as you would expect. It is about the voyage, the vastness of space, and the fact that here on earth we look like a lonely planet inside an endless universe of solar systems and galaxies.

The one I track I decided was my favorite and I added to my New Age Music Reviews Spotify Playlist was “Asteroids.” It is a lovely track filled with the foundation of classical piano and the sounds of space ending with whooshing and powerful sounds of an asteroid passing by.

Mission Statement: In The Pale Blue Dot, I try to provide resonance to our ever-growing knowledge of who we are, where we came from, and what may help life on this planet continue well into the future. The language used is intended to celebrate scientific achievement in a way that fosters spiritual revelation, examines the social fabric of our species, and provides hope for our future.

That is a very prolific and meaningful thought process and the motivation behind this cinematic and thought-provoking (mostly) instrumental voyage through the stars.

“East of Eden (feat. Rebekah Eden)” is a gorgeous track with the addition of Rebekah Eden’s wordless vocals which serves as an added instrument. This is the story of Cain and Able. According to the book of Genesis, they were the first two humans born. Cain murdered Able, making him the first to die. Of course, there are more details to the storyline and the track is one of many shining moments on the recording.

Terry Lee’s piano playing is exquisite throughout in The Pale Blue Dot along with many layers of keyboards, sounds, and effects that complete each track and make it a full experience to reflect each title.

“Memories of Love” is a very touching song and when you see the accompanying picture on the media player it will melt your heart. On the other side of that, there is the absolute truth about “Global Warming,” which hits you hard when you see the picture of the melting and steaming earth. This is a scientific fact so don’t let the politicians in Washington ignoring this and saying it is not true or a hoax fool you. I think that most people with any sense of reality can see this happening with all the natural disasters across the globe. It is an epic track, to say the least, and yet another wake-up call. So, when we will ever wake up before it's gone too far and we commit genocide of the human race and all its inhabitants? It is a hard thing to watch knowing what the ultimate end will be if we do not take action and make it our priority. I do not want to see my grandkids going to Mars to live under a dome and our blue globe turning into a massive desert.

“The Pale Blue Dot (Train to Dachau Redux)” ends significantly with the voices of people from around the world. The solo narrative holds impact and truth based on the realities that we face and have always since our existence. And Carl Sagan says, it is “the only home we have ever known.” We should cherish, respect it, and take care of it for our future generations. The future is now, we are living it. Sometimes it takes a message like this to sink in and hit home and some incredibly moving music to push it all one step further. All things considered; The Pale Blue Dot is one of the most important releases of 2020.