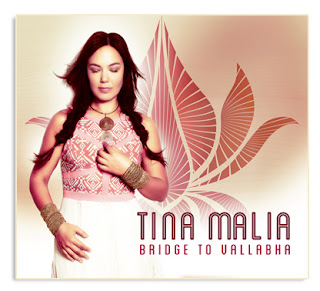 Tina Malia is an artist rich in voice and spiritual essence. Her first album Shores of Avalon was critically acclaimed. Her other self-produced albums include Jaya Bhagavan, The Silent Awakening, The Lost Frontier and her newest album Bridge to Vallabha.

As a child both of Malia’s parents encouraged her musical growth. She has become an accomplished singer, songwriter, instrumentalist and sound engineer focusing on the healing energies of folk, world music, dream pop and sacred sounds. In Bridge to Vallabha Malia incorporates sacred chants in Sanskrit, Hebrew, Gurmukhi and English.  Instruments included in the album are nylon string guitar, Rhodes piano, charangon, vibraphone, lap steel guitar and cello.

I first heard Malia when she released Shores of Avalon nearly fifteen years ago. Her musical style and clear voice resonated with me on a deep level and the album is one I continue to play to this day. Her newest work is less in the Celtic/Goddess realm and more universally spiritual. While I can’t understand most of what she sings in this album, the chanting is a healing force just the same.

“Om Sarve” is the first song on the album. It is a blend of world music and melodic resonance that captures the imagination. Lilting vocals and strumming notes caress the ear into sublime bliss. Oceans of sound flow over you and the day retreats just a bit, letting you wallow in the tidal pool of Malia’s angelic voice.

“Ek Ong Kar” begins with the textured sounds of the jungle. Chirping insects, birds and the croaking of frogs intersperse with percussive elements and chanting. The repetitive nature of the piece reminds me of sitting across from a friend as a child playing patty cake and trying not to be the one who misses the hand. A joyful song, it resonates with youth and vitality.

“Long Time Sun” is performed in English. Sweet and languid, Malia’s voice sweeps along guiding the listener toward a path of peace and tranquility. This song, more than any of the others reminds me of why I fell in love with this artist so many years ago. She has a purity of sound and a creative spirit. The vocals are interspersed with piano and the twang of a lap steel guitar.

Tina Malia is an artist with a rich background. She uses elements of pop, folk, world music, new age and sacred chanting to craft an audible landscape to enchant the listener across boundaries of language and time. Her voice is crystalline and with the textured instrumentation of her work Bridge to Vallabha is an album not to be missed.