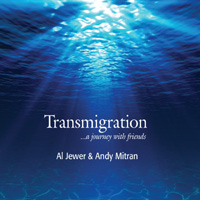 Al Jewer and Andy Mitran have been musical partners for 15 years now. The multitalented duo released Transmigration...a journey with friends in March this year. It is culmination of 2 years of hard work. They had some help along way, their friends were 22 luminaries such as Miriam Stockley, Tony Levin, Jeff Oster, Jeff Pearce, Ricky Kej and Richard Gannaway to name just a few. The new age community is a tightly knit group that likes to join their talents to form powerful and meaningful collaborations. This recording was no exception.

There are 14 tracks to enjoy on this album and every one is a diverse slice of new age world instrumental fusion. They have a worldly meditative atmosphere that draws you in.

“Council Fire” is one that really got my attention; it features the talented horn player Jeff Oster. The brass certainly adds another welcome element to the mix. The feeling of finding one of those ancient civilizations comes to mind with elders gathered around a fire for deep and moving discussions are pictured.

The multitude of instruments that are used gives it that world fusion sound and that is what makes it so eclectic and each track a new adventure. “Cloudwalker” is another track that summons certain visions. Clouds are soft, light and they paint the blue sky with their natural beauty. The music takes you away as you float with the dreamy sounds of piano and flutes. They fill the air as other sounds are mixed in to complete the walk across the sky with the clouds. It sounds like it could be a Native American name given to a spiritual leader or it can be anything you see with your mind’s eye. That is the gift of music, its purity and beauty speaks to you.

“Transmigration” is the all-important title track. This one lands at number 8 but it does not overshadow the importance it carries for the album. Many times a title track can open the curtain for an album and set the tone however in this case it was not necessary as every track is a standalone piece of art. I think the many instruments and the way that they are presented make the difference with this recording. It is evident that this was quite a journey for all involved and the fact that it took two years makes sense once you take in all of this incredible music. It is very complex and moving. The title track is the longest and most prolific clocking in at 7:17 minutes.

Beauty lies in the eyes and in this case, the ears of the beholder. Behold Transmigration...a journey with friends one of the best new age and world releases of 2016.