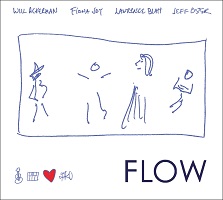 Sit back and let the music FLOW. That statement could not be supported in a more creative way than on this recording. Four accomplished musicians got together to create something very special.

Will Ackerman, Fiona Joy, Lawrence Blatt and Jeff Oster, all well know names in the new age music industry, combined their skills and experience to produce 11 tracks of outstanding instrumental music. There are several other contributors as well to make this entire effort a reality.

I think what I enjoyed the most about listening to FLOW was how that title fit so well. This is eclectic and very tastefully done. Because of the blend of musicians contributing to this project you get a little bit of all of them, and the end result becomes greater than the sum of its parts. A team effort if you will, is what makes this music so different from track to track.

If it’s Will Ackerman or Tom Eaton’s guitar and the production values they bring to the table or Jeff Oster’s gorgeous trumpet or flugelhorn calling out for an answer, this music beckons you to partake in the experience.  And Tony Levin, the most incredible and diverse bass player on the planet, is on the recording. He has become the resident bass player at Imaginary Road Studios, and god knows how he does it with all his other projects and live appearances on his schedule. All of the people involved seem to be in an endless cycle of creativity that has blessed us all for several years now.

The beauty of FLOW is the fact that individuals that have perfected their own sound and created their own legacy and styles have compromised that individuality to become one unit.  This is a unit that has a spiritual connection and purpose that is undeniable.

If you listen, feel and absorb the FLOW, you will come to your own understanding of what was accomplished on this album. Let the river of sounds and textures take you away for a while, I can guarantee you will be back for a second trip down the stream.

Note: You can have the rare opportunity to see all of these artists together at Carnegie Hall on October 6th! Tickets Here. 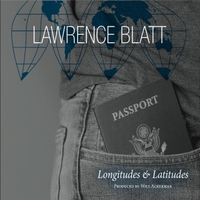 When I saw that Lawrence Blatt’s latest release Longitudes & Latitudes was produced by Will Ackerman it totally made sense. Ackerman is a great acoustic guitar player that I have enjoyed over the years particularly when he was running his Windham Hill label.

Right from the outset of this album I could hear Ackerman’s influence however now he is more of an influence on the production side of the house. Tom Eaton is the engineer on the album as well, a consistent partner of Ackerman.

As stated on his website Lawrence often plays in an open tuning to create a nice rhythm then adds the other instruments. It is a very effective combination. He plays electric and acoustic guitars and synthesizer (and like any good musician has many to choose from). Many of the guests appearing on the album help to make this journey complete including Ackerman and the marvelous brass of Jeff Oster. Because of the diversity offered on the album it is clearly an instrumental foray into new age, jazz and world.

The percussive elements on the track “Ima” along with various earthy tones, switch the albums path to a worldlier flavor when prior tracks were bubbling over with a definite new age/jazz flavor and inspiration. The beauty of many of the recordings I have heard this year pay tribute to Mother Earth and that is the route Lawrence took as well on several tracks. With 15 tracks there is plenty to process and it’s a beautiful thing.

“Upon Griffy Lake” carries a gorgeous melody with the equally attractive female vocals of Noah Wilding. The lady seems to call out to you from beyond as the music lets you float to your destination via the acoustic and electric guitar lines of Lawrence. He uses a intriguing and impactful combination of acoustic and electric instruments with the young lady’s voice serving as an instrument as well. It is one my favorite tracks. So much beauty and gracefulness packed into one song is hard for the mind, body and spirit to miss.

The other component I recognized on this album is the excellent restraint exercised when needed to accentuate each instrument allowing for the best compliment to each. Each track moves from strength to strength.

“Noches de Barcelona” is full of the embodiment that is Spain and the video with the track is beautiful. It was featured on our Rate The Tracks site and is provided here as well.  We have also included a preview of the album with a video and a Soundcloud stream so you can get a good idea of what this talented artist can offer.

This is 5-star recording session that is both relaxing and exciting at the same time, not an easy task to pull off. It is all done extremely well and the tastes of genres is most appealing including the mixture of them all in one single track.

Add Longitudes & Latitudes to your list one of the very best instrumental recordings of 2016. It’s not hard to do if you appreciate new age, jazz or world or all three combined, the choice is obvious so give it a good listen! 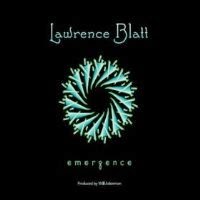 Produced by Will Ackerman of the incomparable Imaginary Road Studios and written by Lawrence Blatt, Emergence is an album that will keep you company for many long hours. It is an album filled with images of the natural world in all of its wonder. Patterns. Diverse and seemingly simple, they can create masterpieces of form and function. Such is the case with Emergence. Artists involved in this project are: Lawrence Blatt (guitar, accordion, mandolin), Charlie Bisharat (violin), Lila Skylar (viola, violin), Eugene Friesen (cello), Sam Bevan (double bass), Jill Haley (English horn) and Richard “Gus” Sebring (French horn).

“Emergence” is the title track to the album. It features violin and guitar movements that evoke images of a new seedling bursting forth from the cocoon of mother earth. The trembling growth of a frail tulip as it stands straighter each day and turns its face to the light. One day at a time it grows stronger until it stands tall away from the green stems and leaves, bursting into burgeoning crimson glory. Violin and guitar dance as the repeating majesty of life and finally death and renewal comes again and again. Beauty. Grace. Life.

“Gar Du Nord” is the third piece on the album and it struck me utterly when first I heard it. Double bass, cello, viola, violin and guitar twist and undulate in chord progression and scale theory to craft a spiral of thought provoking effervescence.

“Poloyne” is a pulse pounding dance that could be the background to a well-crafted romantic drama. Eyes meet across the room. Hands join as two flames connect on the ball room floor. Sweeping movements bent on seduction win the increasingly rapid beating heart as the tempo increases. Violin and guitar create passion with flamenco influences. A powerful piece filled with evocative imagery.

“Green Corn” is the last piece on the album and has a combination of French horn, guitar and violin. Truly artful, this is a tale that unwinds into wide open spaces and the freedom of land and prosperity. Jaunty and full of life, this track is as regal as it is masterful. The American Dream of land, independence and prosperity. This is our land. Green corn and fields of plenty…

Lawrence Blatt has succeeded in comforting the savage beasts in my household. Even as the thunderstorm rages outside, the soothing tones of Emergence have brought the canine residents of my abode into happy slumber. (Thank goodness for small miracles!) The exploration of patterns and progression of chords has truly crafted each work into a snowflake like accomplishment. I find it amazing that no written music was given to individual performers, letting them rely on music theory and the talents that come from deep within. This is a project all the participants should be very proud of and is one that will be in my collection for a very long time to come.