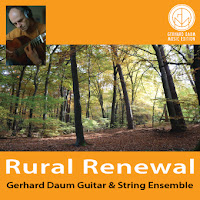 Gerhard Daum is an artist that is inspired by his surroundings. The idea is to put yourself in the right place to find that inspiration. I think Gerhard did just that when he recorded his album Rural Renewal. The cover story is staring at you on the front of the CD. It does not take long to see where the man derives the impetus to pick up a guitar and create music.

That is the first part of the story, the second is to focus on the various sounds of the guitar. He does so beautifully on the twelve tracks afforded the listener. As he indicates in the CD liner notes, each track tells a story. He is very good at that and his expertise has been used in the motion picture industry for soundtracks as well. In fact, he is an award-winning film composer. He also adds multi-instrumentalist to that resume.

I would not hesitate for a second to describe the movement and consistency of this recording. It is excellent from start to finish with no apparent weaknesses. I do appreciate instrumental music in general and particularly guitar oriented compositions. It was an easy sell for me but that does not give an album a free pass. It has to be excellent for me to really appreciate it. I am here to tell you that Rural Renewal is superb.

The gentle guitar sweeps that you hear throughout this album are quite inviting and relaxing. There are some other elements mixed in to give it all some layers and color including the violin and dobro. Those are factors that support the delicate yet stimulating guitar work being presented.

I found the title track stunning and picturesque. It was the kind of track the perks up the senses. Actually, every composition had a value and a distinctness all its own. I am sure that is why it was over so quickly. It is the kind of music that has you saying once its over “That’s all? I don’t want it to end.” And that my music listening friend are the keys to the kingdom as far as I am concerned.

When a listener, any listener, takes in a complete recording and enjoys it that much it normally fly’s right by. It is kind of like a job you really enjoy and before you know it the day is over. If you are fortunate to be listening to music like this or have a job where the days just disappear in the flash, well consider yourself blessed.

Gerhard Daum is a very special talent that deserves all the credit for creating a top notch instrumental guitar album.