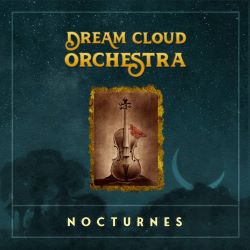 Dream Cloud Orchestra is the music project of Michael King, a composer and recording artist. Nocturnes is his debut release.

Michael found a fascination with the progression of piano and then heard that same music set to a live orchestra. He endeavored to create Nocturnes to emulate that same sort of energy.

Creating the entire album at home with the unique technologies we now have available was a key to accomplishing what he envisioned. When he saw some silent films accompanied by an orchestra, it amazed and inspired him.

Every track is complete with beautiful orchestrations, pianos, and synthesizers. Painting music onto a blank canvas and picturing the movie unfolding in his mind, Michael creates ten tracks, which encompass an hour and a half. Tracks like "Summer Night Wonders" and "A Slumber Journey" clock in at 10:57 and 13:33, respectively, while the curtain closer roles in at a substantial 14:55. Those three tracks push this beyond the typical 45 to 60 minutes most recordings are.

The strength of the music is well suited to an extended relaxation period, or I can see it used for soundtracks and other media uses. The absolute beauty in this music will give any astute listener satisfaction of time well spent.

I began watching silent films at a very young age, found appreciation for their art, and felt compelled to know more. I sought books about these artists, such as Chaplin, Keaton, etc. I can understand Michael's fascination with how the music related to what he was watching and how it added to the story and created another ongoing element of emotion to fit the scenes. Understanding that relationship helped him complete this project and attain the desired results.

In "A Slumber Journey," you will hear laughing to ensure the element of humanity is present. The laughing tone creates different moods that, in turn, go with the ever-changing flow of the music. The artist portrays his silent movie in his mind, accompanied by music. With the concept of the nocturnal world encompassing his thought process and the music to match, you have a blended script perfected.

At first, I was a bit daunted by the length of the tracks and was concerned I might lose interest too soon. That did not happen. The reason is that the artist created something so accessible and exceptional musically that you find it hard to resist listening to each track to its completion. It is all enjoyable and very relaxing and, at times, thought-provoking. What helped me was understanding the project, what inspired it, and the previous references to my similar interests. To enjoy this music to its fullest (not a necessity, just a recommendation), read the about section on Michael's website. It will give you food for thought before listening.

The fact that Nocturnes is a debut release bodes well for the future in music for Michael King and his Dream Cloud Orchestra.

03. The Gates of Dreamland