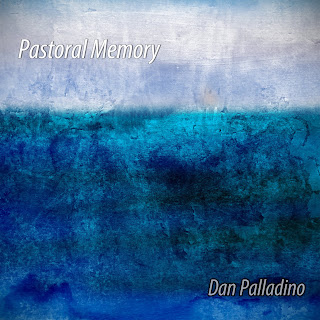 Dan Palladino is no stranger to recording music. His debut in the new age/ambient genre just arrived in February this year. Pastoral Memory is seven tracks born out of the art of improvisation.

Dan uses a blend of acoustic and electric guitars over the top of synth harmonies that breath in and out to create a fluctuating and soothing effect. Music like this is like an animate object taking form in your mind’s eye. One of the best examples is the lead-off track “Rising.” It is the ultimate musical exercise clocking in at a plentiful 10:15.

Some of this music can be used for focus and meditation. You will hear a steady tone throughout parts of songs like “Thankful,” which is another generous portion of Dan’s art at 5:13 then it nicely segues into “Joyful Cleansing” yet another space in time that allows for focus and relaxation, giving the listener 8:48 minutes. Dan uses the guitar for consistency with a steady picking while you hear the movement of water. Then another seamless segue goes right into “Passing Storm,” with rain and thunder, as the synths add an additional layer of texture and ambiance. As the storm passes the birds are happy again tweeting away and it blends right into “Aftermath.” So now you are seeing the logical progression of the music in the titles and the purposeful transition from one track to another.

The addition of the synths is essential in making this an ambient treat for the ears, mind, and body, which for this listener, equates to a happy soul. I for one really appreciated how all of this was arranged and titled. It all made sense to me and did arouse my internal receptors to all the sounds and vibrations.

Six out of the seven songs are given plenty of time and space for the creator of the music and the appreciative listener. For a debut in this genre, this a stunning group of tracks brilliantly composed and exercised by Dan Palladino. One other point is the cover, the cool color of blue water and the white clouds set you at ease and set you up nicely for what you are about to hear on Pastoral Memory.