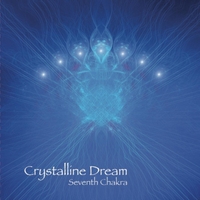 The seventh chakra is a tool that helps us communicate with our spiritual nature and access higher levels of knowing. Finding an entire album of tracks devoted to that very important chakra is a good way to tune in and allow the gateway to open and allow knowledge and healing to take its natural course.

Seventh Chakra is the most recent release from Crystalline Dream, their fourth proper release. The driving force behind these projects is Richard Ross, a very talented and diverse musician. He also runs a full-service recording studio called Threshold Studios.

Richard holds a Master’s Degree in Music Composition so it looks like he has all points covered to compose, create, and record music as he sees fit. And above all, he has the natural talent to employ the combination of those skills and education to create some beautiful music.

The seven tracks included on this recording are ranging in tempo and texture and employ various instruments. The diverse array of sounds presented makes this album very interesting and enjoyable. Upon first listen, you don’t know what to expect. I was very pleased with the selections and how the track titles meshed so well with the audio and vibration levels. The variety on Seventh Chakra is what makes it such a strong release. The music is a tool to reach a higher level of consciousness thus the perfect title and number of tracks!

Amazing people like Richard Ross are a gift to the universe and should be cherished and appreciated. The music this man creates is a slice of heaven and the kind of sounds that will allow you to separate yourself from the material and physical worlds and focus entirely on meditation to a higher level of clarity. It is always up to each listener however this is my belief of what this music can accomplish for you. 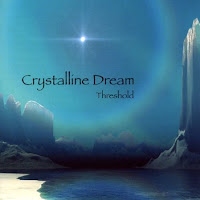 Crystalline Dream is a band with the intent to craft a vision with every album they perform. Threshold is the entryway to a journey of enlightenment, with each album gaining the listener increased wisdom.  The main band members for Crystalline Dream include Richard Ross, Korey Ross and guest artist Peter Phippen.

The first track on the album is "Threshold." Ethereal and drifting with flutes and an electronica based backdrop, the music brought me to a place of introspection far away from the swirling chaos that makes up most of my days. It was as if I were perched on a threshold to another place…a place of peace and tranquility that if I just took another step, it could be mine. The flute urges you forward even as the cosmic wave of the electronica pushes and whispers you to a dwelling where that elusive joy is hiding. Voices break over you and the music funnels you down a new rabbit hole…the journey is just beginning.

"Inner Peace" is another song that captured my attention at the onset. Harp sounds and chirping insects make it seem as if you, the listener, are in the middle of a forest, being lulled forward toward an enchanted paradise. Just one step closer toward the pool…just one more. The ethereal music drifts in the background like a hidden current pushing you along toward your destination. This is what happiness sounds like and if sound could be painted in color, it would be a spiraling ribbon of shimmering blue, wrapping around and around in layers of gossamer silk, one delicate note at a time.

"Borealis" urges you toward the end of your comfort zone. Icy and grinding, you mark your passage with effort and are ever working toward your next destination. The price of enlightenment comes with great perseverance. The sound of flutes and the bitter winter wind skitter along the top of the ice as you reach for the next fork in the road…the next vision of flickering lights to direct your path forward. Beautiful and treacherous, the way ahead will not be an easy one. Growling and grinding electronica and percussive elements mark your progress and the undying urge to find enlightenment at any cost.

Crystalline Dream have begun a journey of sorts with Threshold. Using the ethereal and at times sparse elements of electronic music, it is blended with percussive elements, flute, harp and other sounds such as whispered chants or insects. This instrumental New Age experience focuses on enlightenment and is the beginning of what so far is a five album progression toward grace. It is a pleasant sounding album that any fan of New Age music will vastly enjoy. 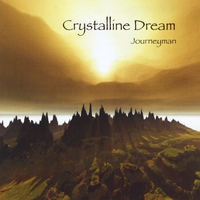 The Crystalline Dream project started in 2006. It is a series of 5 albums telling a musical story of a personal journey, discovery and growth. Crystalline Dream takes you on a spiritual journey of music, emotion, and sonic soundscapes with Journeyman and the other releases available. This is how it’s explained (abbreviated) on their website and I would have to say that is quite accurate.
Richard Ross (keyboards, flutes, recorders, percussion and voice), Korey Ross (acoustic & electric guitar) and Peter Phippen (Shakuhachi and Native American Flute) come together to create beautiful relaxing sounds.

I can listen to music like this on any day or evening and feel it move me is some way. I enjoy the relaxing sounds of the flute… it is enchanting, and it calls to you. The masterful touch of Peter Phippen and the multitude of talents from Richard Ross come into play on each track.

Journeyman was released in 2013 and three years later it still sounds relevant. It resonates with textures, atmospheres, mysticism and earthy tones. The 10 tracks flow into each other with great ease. The title track leads the way.

Tracks like the atmospheric “Lady of the Meadows” is soft but enduring the you find yourself “Drifting” into another time and space with this fine music. That is the purpose from what I can determine, at least that is the effect it had on me. Once you make your way to when the curtain closes a subtle reminder closes out with a reprise of the title track.

Journeyman is a fine instrumental recording. It is by design made for those who wish to center themselves, relax and get in tune with what is around them. All of that and more can be accomplished through this music.