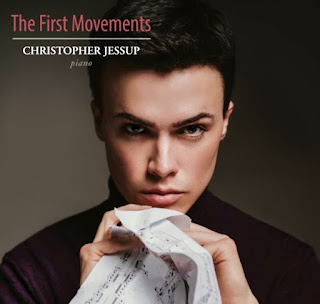 Christopher Jessup is a rising star. After you read his bio on his website, it is obvious why. Also, the release of The First Movements last summer solidified his standing as one of the outstanding piano soloists in the world today.

Christopher offers eight tracks of pure classical instrumental solo piano work to listeners. His many appearances at the iconic Carnegie Hall garnered acclaim from the New York Concert Review, commenting on his "high standard of technique and impeccable phrasing."

I would have to concur on that assessment of his pristine presentations, of each composition on The First Movements. The music is crystal clear, with a poignancy and sense of history on display that would make the original composers proud.

I do not claim to be intimately familiar with all great composers; however, I know when the music is in proper context and presented with grace and accuracy. This young man is very gifted, and I found further appreciation for classical music in its simplistic unembellished form through the piano's keys. The beauty of the instrument raises to another level through the talented fingers of Christopher.

Piano music is unique, and when a motivated and exceptional talent begins with the Jullliard School (like the ultra-talented Jordan Rudess), there can be a long and successful road ahead. I can certainly see that Christopher and this recording is just the beginning of one remarkable and decorated career.

After making his way through this recording with his selections from some of the most prolific artisans of their time, Christopher adds a bonus track of his own making titled "Le Revenant." It clocks in at 7:40, the most extended exercise on the album. With this tribute to the greats faultlessly performed, it remains in the forefront of your mind until the bonus track begins.

"Le Revenant" is a solid curtain closer for The First Movements, and it gives the listener a glimpse of the creativity and pure talent of Christopher Jessup. The composition has many emotions weaving its way through with drama, color, moods, and most of all, a progressive classical approach. His music is a soundtrack to reflective moments in a movie thriller or the anticipation of a significant moment right around the corner. The expressive and changing paces of the music make the piece so intriguing from beginning to end. It leaves you wondering what could be next for this shining star.

Christopher Jessup is off to a fine start in his recording career, and I look forward to much more of his progressive improvisational classical work in the future.

By Keith "MuzikMan" Hannaleck at January 13, 2022
Email ThisBlogThis!Share to TwitterShare to FacebookShare to Pinterest