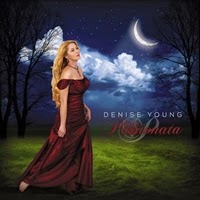 In 2012 Denise Young began the journey that would lead her back to Imaginary Road Studios and the Steinway piano awaiting her gifted fingers. Passionata is a tapestry of artful melodies and drifting majesty that will seduce the listener in the first piece. It is a discovery and rediscovery of love that dwells in the hearts of us all. It may fade and die, but will rise again like the budding of new leaves.

“Passionata” is the opening track on the album. Tentative piano strokes awaken. The rustling of sheets as the morning sun creeps over the horizon and the first kiss of a lover’s lips as the day breaks. Love blossoms in the heart, a spiraling drift of skirts as they spin out on a dance floor. Notes of music wrap around you like silken gauze. Loving and warm. The purity of passion. The truth of love’s everlasting bounty.

“Above the Clouds” crafts a rhythm within the keystrokes that snares the listener without even trying. Floating piano movements entwine with the elegance of the cello. Steady and filled with flight, this piece takes you away as the cello ramps up amidst the gentle rhythm of the piano strokes. The two marry well, bringing the listener to a place of peace and hope.

“Awakened” is another piece that bears the mark of the cello. Percussive elements, piano and the graceful string movement of the cello blend in artful form and function. Eyes open to the dawn of possibilities. The music speaks and the song spins out, a dancer on point, reaching for the sky, twirling amidst the sparkle of sound.

Passionata is an album filled with artful song and elegant movements. Will Ackerman has produced another staggering work of genius. Denise Young is an artist with vision and her devotion to the Steinway piano shows with every stroke of a finger. Tom Eaton’s mix mastery is well renowned and he didn’t miss a beat with Passionata. This album is a keeper in my music library.